31 December, 2015 by Lic. Spencer Richard Mc Mullen Comments are off 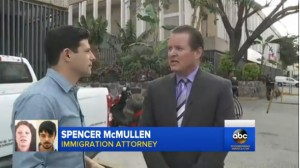 I have been interviewed by various news sources as many have questions about the legal system in Mexico and to many there are more questions than answers as many are unaware about the inner workings of the Mexican legal system.

Why does everybody run to Mexico? Is it a good hiding place? Are there no laws?
Why did they stop Ethan Couch´s deportation?

I have not seen the papers filed against the alleged fugitive mother and son nor any amparo filings in the federal court. My intent is to inform people about general Mexican and international law and procedure for immigration cases so that they understand what is going on in this case and that the authorities are following the law and due process. Just as the US is a nation of laws, so is Mexico with an extensive, albeit different system with checks and balances to ensure justice and due process for all within its borders.

Using the statement released to the press from the Jalisco State immigration head that the two did not register upon entering Mexico, I make the following analysis:
Visitors coming from the United States to the border areas of Mexico do not need to have any type of immigration document if their stay is only for a few days and restricted to the “free” zones along the border which may be narrow strips along the Texas border, to about half the state of Sonora or the whole state of Baja California.

If people who entered this way wish to go further inland then they will need to request an immigration document, usually a tourist card (FMM) which is good for up to 180 days.
The US has a similar system, Mexicans visiting the US by land use their visa to be able to arrive at the border and then the decision to admit them is up to the border agent, that permission only allows them to be for short periods in the border area and if they wish to stay longer or go further north than the 25 kilometer limit, they would need to request a form I-94 or else they would be illegally in the US.

This policy by both nations is a balance between control and encouraging tourism and shopping in the border areas where there are large numbers of people crossing.
Once the two went further south then they were in violation of Mexican law by not obtaining a tourist card and registering, the same in the US would be the equivalent of entering the US “without inspection” as there was no record of their entry into Mexico.

The two were apprehended in Puerto Vallarta by the Mexican authorities and then many assumed they would be promptly deported. While this usually is the case, in Mexico there are no immigration courts or judges. The National Immigration Institute of a federal administrative authority who can issue deportation orders and detain people to ascertain their legal status in the country.
Foreigners detained in Mexico have rights under international law and Mexican law, even ones accused of crimes or illegally in the country. They have the right to an attorney, a translator and to have their consulate or embassy notified so that they may receive consular assistance. any violations of the aforementioned rights may nullify any and all actions taken and the proceedings will be ordered annulled.

Many people assume it is like in the movies where a van pulls up and they take a guy and drive him to the airport and stick him on a plane. This is illegal and would be kidnapping. All people in Mexico must follow the law, the authorities as well as the inhabitants. Many dont oppose their deportation orders as it can be expensive and in cases as this one just postponing the inevitable.
Those foreigners exercising their right to counsel and who have the funds may pay for their attorney to file an amparo. An amparo is a federal constitutional lawsuit. It can be used as an appeal or may be an extraordinary writ such as a writ or prohibition or writ of mandate or even habeus corpus. Part of the amparo filing is a stay of execution on any deportation order. That stay of execution is automatically granted upon filing in cases of deportation, exhumation or depriving someone of their liberty.

The temporary relief is granted without reviewing the merits of the case, just like in the US many attorneys say you can indict a ham sandwich, here in Mexico you can get an automatic stay pretty easily. Remember that any deportation order was not made by a judge and the detainee is using their right of redress to ask a judge to maintain the status quo so that their case may be heard and the evidence and allegations of procedural violations heard. The federal district court specializing in administrative law will then set a hearing date to decide if the stay of execution should be extended. The initial stay on the deportation order really means nothing as a judge has not ruled on the merits of the case.

One of the conditions for a stay is that it is not against the public interest. The law also states that a stay shall not be granted where a crime may be consummated or continued or its effects which in the present case the judge could use to deny an extension of the stay as keeping the son in Mexico is causing foreign laws to be violated.

The son does not appear to have Mexican family and would have to apply for a tourist visa which authorities would probably deny due to the immigration law that states they have the right to deny entry or renewal or immigration documents to people who have pending or past criminal charges against them, they may also cancel residency visas of people who already have them if they learn of this information.

This would leave the only option of deportation. It should only be a matter of time before the legal filings run their course in a matter of days or months depending on how much effort and money Ethan Couch wishes to spend and the workload of the federal court that was assigned the case as well as any appellate 3 judge panel courts. If the federal district court judge does not extend the stay of execution on deportation then he can appeal that order (Queja) and if the amparo is denied it can still be further appealed but it is only stalling the inevitable.

Generally amparos in the federal district court can take a few months to be resolved. The stay on execution of the deportation order could be heard within days or extended. If the outcome is not favorable to Ethan Couch then his attorneys could appeal it and that appeal could take a week or more. The underlying amparo, if not favorable to him could then be appealed to a three judge federal court where resolutions are taking anywhere from a month to a year.

Lic. Spencer Richard McMullen is a litigating attorney and official court translator in the State of Jalisco.

Litigating Attorney and Official Court Translator in the State of Jalisco, Mexico